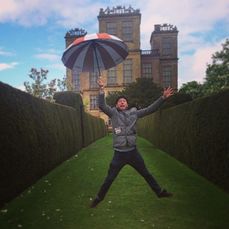 Clearance          Enhanced CRB and security cleared to work in prisons


Raised in the wilds of South West Wales, I moved to Bristol to study (BA hons Time Based Media - 2:1)  Over the last 26 years I've been a film maker in many guises.  These days I mostly make short docs and promo films for clients in the UK and across the world.  In the past I've been known for blurring the boundaries between film making, education and community work - working with adults, teenagers and children in all sorts of environments to make films.  Helping them to be creative and have a voice.

I have the skills to take a film from inception to completion, and have experience in all areas of production and I regularly employ crew members on larger projects.  I enjoy working with people from all walks of life and diverse cultures, and love developing ideas and getting a story and message out there.

I've been lucky enough to work abroad regularly - Nepal is now my second home!  Where I've made mountain bike, resort and charity promos.   I've worked in Mongolia three times filming at a polo and horse riding camp.  And as an integral member of the Kids Kino Project, I've fund raised, organised and taken a mobile cinema to Haiti, Nepal and refugee camps in France to show films to displaced communities and also made films with children there - click here to see the film I made of our trip to Haiti.